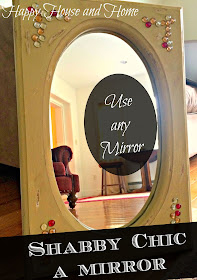 Have you ever used Urban Dictionary rather than Wikipedia? Well, ya should. (Let me warn you, it's hilarious, but it's not always for the faint of heart.)

Anyway, I decided to look up "Shabby Chick" to see exactly what it means.  I know, everyone knows what it means, but I wanted a definition.

According to Wikipedia "shabby chic" means: furniture and furnishings that are either chosen for their appearance of age and signs of wear and tear, or new items that are distressed to achieve the appearance of an antique.

However, if you look on Urban Dictionary, you'll see the following definition of "shabby chic":


Regardless of the definition, and blatant sarcasm on Urban Dictionary, I like it. And fortuitously, I had a boring mirror that needed some personality. So being a person with no money who doesn't mind living with old, crap, beat up furniture, I gave the mirror a coat of primer, and a coat of paint. 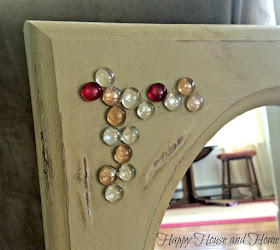 Once the paint was dry, I went over the mirror with my palm sander and with steel wool to distress it. I then whacked the wood frame with a hammer in a couple of places to add some dents dimension. I didn't hit the wood too hard, because, well, I was working on a mirror.  (I've already had 7 years of bad luck and don't want any more!)

I dusted the mirror down, and then used E6000 glue to affix some glass beads.  Once the mirror was ready for a photo, look who turned up. Came around the corner at the exact second I snapped a photo! 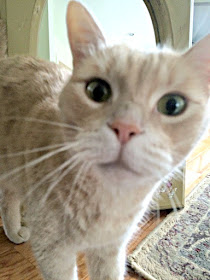 Here's the mirror hung in the dining room, where Sammie can't photo bomb: 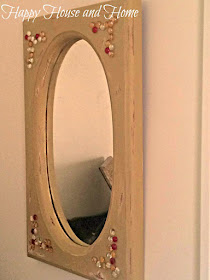 Got thoughts and ideas for me? I would LOVE to hear from you! Julia